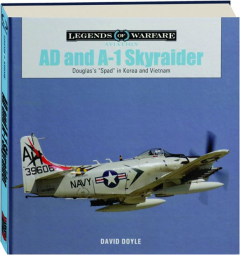 AD AND A-1 SKYRAIDER: Legends of Warfare

Capable of flying low and slow while armed with a massive array of ordnance, the Skyraider not only took on the role of attack aircraft but was also used as air cover for troops on the ground. Its impressive payload earned it the nickname of the "flying dump truck," while its reliance on a massive radial engine caused others to refer to the Skyraider as the "Spad." Well illustrated, some in color.