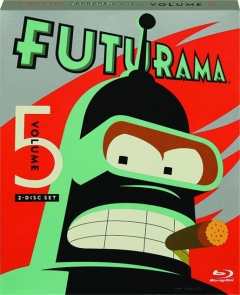 Widescreen. From The Simpsons creator Matt Groening comes an animated series light years ahead of its time. Join Fry, Bender, Leela and the rest of the gang for 13 hilarious episodes that tackle some of the most controversial subjects in the galaxy--including evolution, mind exchange, feline intelligence and robosexual marriage. Hey, it could happen! English SDH. Over 4 hours on two Blu-rays.