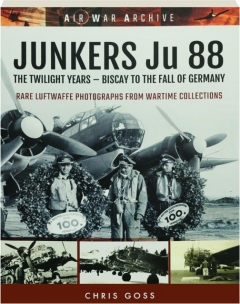 JUNKERS JU 88: The Twilight Years--Biscay to the Fall of Germany

Designed as a fast bomber that could out-run the fighters of the era, this survey discusses how the twin-engine Junkers Ju 88 became one of the most versatile aircraft of the Second World War, with more than 16,000 examples being built in dozens of variants between 1936-1945. Fully illus.