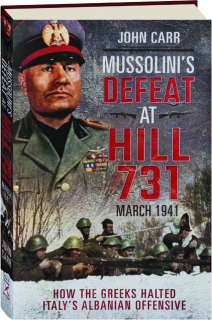 Hill 731 was the scene of the most ferocious battle of the Greek-Italian War in Albania, on March 9, 1941. Mussolini had wanted a spring victory to impress the Fuehrer. Instead the bloody debacle of Hill 731 may well have contributed to Hitler's decision to postpone his invasion of Russia by at least four weeks--a costly delay. Photos.