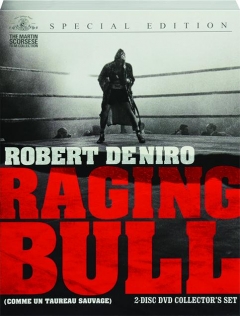 Widescreen. Martin Scorsese's film has been identified in recent years as one of America's greatest films. The film garnered eight Oscar nominations and won two, including Best Actor for Robert DeNiro. DeNiro plays Jake LaMotta, a boxer whose psychological and sexual complexities erupt into violence both in and out of the ring. Also stars Joe Pesci. Rated R. CC. In B&W. 129 minutes on two DVDs.

This item is a DVD. It is in wide screen format.