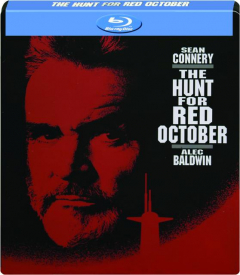 THE HUNT FOR RED OCTOBER

A new Soviet nuclear sub is heading for the U.S. coast under the command of Captain Marko Ramius (Sean Connery). The U.S. government thinks Ramius is planning to attack, but CIA analyst Jack Ryan (Alec Baldwin) believes he is planning to defect. But Ryan has only a few precious hours to locate Ramius and prove it. Packaged in a steelbook case. English SDH. 135 minutes.

This item is a Blu-ray. If included, digital download codes may be expired or not valid in your area.