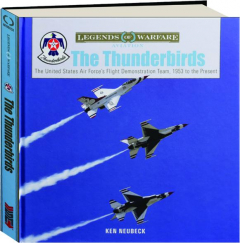 THE THUNDERBIRDS: The United States Air Force's Flight Demonstration Team, 1953 to the Present

Details the origins and early formation of the U.S. Air Force Thunderbirds, as well as describing the different model aircraft that the team has flown during its nearly 70 year history. Neubeck also presents graphic and photographic descriptions of some of the team's signature maneuvers that are performed during an air show.