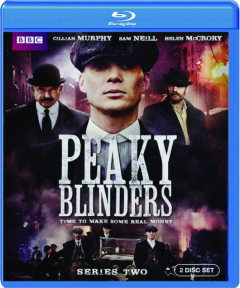 Business is booming for Birmingham's Peaky Blinders gang, but that's not enough for its leader Tom Shelby (Cillian Murphy). As Shelby battles to keep a stronghold on his evil underworld, he risks his life encroaching on the turf of volatile gang leader Alfie Solomons (Tom Hardy). All 6 Series Two episodes. English SDH. Six hours on two Blu-rays.

This item is a Blu-ray. If included, digital download codes may be expired or not valid in your area.